Exclusive: Australian journalist has been detained at a police station in western Tokyo since his arrest on 28 November

Scott McIntyre, the former SBS sports reporter, will spend Christmas and new year in detention in Japan after he was arrested for illegal entry, reportedly during an attempt to track down his school-age children.

McIntyre, an Australian freelance journalist based in Tokyo, was arrested on 28 November after allegedly gaining unauthorised access to the common area of the apartment building where his parents-in-law live.

He had reportedly followed a resident into the building’s main doors in an attempt to seek information from his in-laws on the whereabouts of his two children, whom he has not seen since May.

McIntyre, who has been detained at a police station in western Tokyo since his arrest, was reportedly charged last week with illegal entry and now faces a further period in detention after his bail application was turned down this week, according to people familiar with his case. 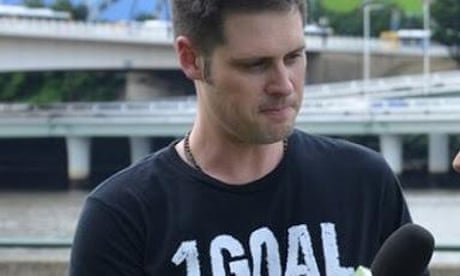 The 45-year-old is being held in a cell that is lit 24 hours a day. He is allowed to take a bath once every five days.

“He is having trouble sleeping,” Catherine Henderson, a friend in Tokyo who has visited McIntyre in detention three times, told the Guardian.

“He knows how serious this is and he knows it’s not good,” she said, adding that the Australian government was aware of McIntyre’s arrest.

The power of Japanese prosecutors to detain suspects for up to 23 days for each potential charge and question them without their lawyers present attracted international criticism after the arrest in November last year of the former Nissan chairman Carlos Ghosn.

Ghosn, who is out on bail facing financial misconduct charges, was kept at Tokyo’s main detention house for a total of 129 days before being released on bail for a second time in April.

McIntyre made headlines in his native Australia in 2015 after he was sacked by SBS for posting controversial Anzac Daytweets critical of what he called the “cultification [sic] of an imperialist invasion”.

“Remembering the summary execution, widespread rape and theft committed by these brave Anzacs in Egypt, Palestine and Japan,” he wrote in one tweet.

“Wonder if the poorly-read, largely white, nationalist drinkers and gamblers pause today to consider the horror that all mankind suffered,” he said in another.

SBS sacked McIntyre the following day, with SBS chief executive and managing director, Michael Ebeid, saying his remarks made his position at the broadcaster “untenable”.